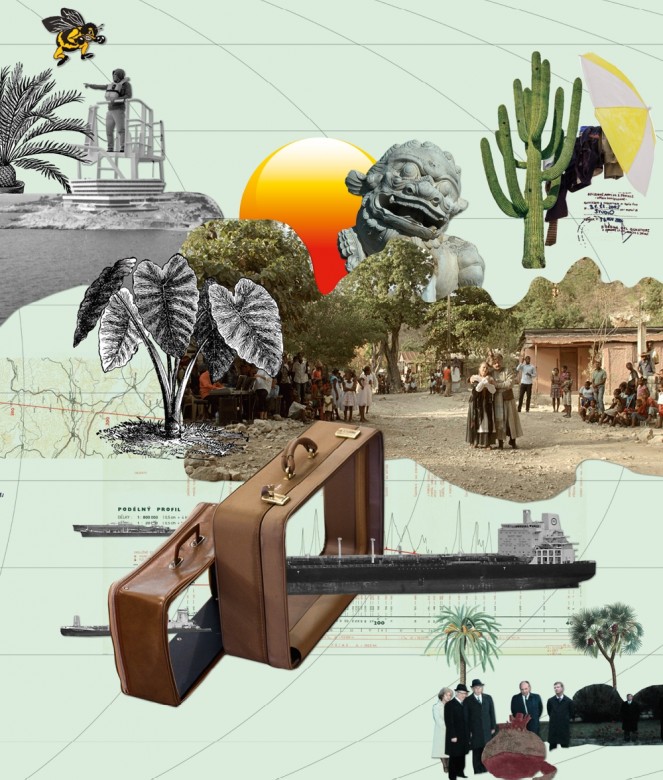 The exhibition looks at travel in a region where freedom to travel was, until recently, a luxury available only to the very few. The revolution of 1989 and the subsequent opening to the world and globalisation processes allowed citizens of the former Eastern Bloc personal mobility on an unprecedented scale. Participation in international exchanges contributed to the region’s identity today as much as the new political and economic order. For two successive decades, capitalism and globalisation carried us farther, faster, and surer, until we got used to thinking in terms of progress with only one direction — forward! Today, we see how that moment was as pivotal for modern European history as it was exceptional. Europe’s response to foreign refugees shows that our participation in the global exchange was, and is, predominantly one-way. We do not willingly share the privileges that we gained after the fall of the Berlin Wall and as a consequence of our EU accession. We are enthusiastic about going abroad, but far less so about welcoming foreigners.

The works presented in the show tell the stories of holiday trips as well as distant journeys and migrations. They focus on a period from the mid-20th century until today, from the closed borders of the divided Cold War-era Europe to the capitalism-driven acceleration of the 21st century’s first decades. They offer a reflection by contemporary artists hailing from the region — the former Eastern Bloc countries, the former Soviet Union and former Yugoslavia — often first and second generation migrants, on the last few decades in the history of Central and Eastern Europe.

Twenty-three artists from fifteen countries show how people, goods, and ideas flow between our part of Europe and other regions of the world. They tell us about Cold War-era tourists dreaming about exotic trips at a time when the freedom to travel was synonymous with political freedom. About travellers, who, on distant voyages, discover the forgotten history of abandoned places. About historical and contemporary migrants, their identity formed at an intersection of languages and cultures. But also about the objects these travellers take with them. About pictures that are to remind them of home and which become a source of knowledge about the world for others. About products that in distant countries turn into ambassadors of their culture. About artworks whose circulation beyond their place of origin lays a foundation for building canons. The artists present various means of transportation, such as ships, trains or buses, as well as visas or permits, that facilitate or limit their personal mobility. Discovering the enriching value of travel, they also shed light on the tensions arising inevitably between the poetics of the experience itself and the political situation that condition it.

Most of us know the familiarity of one home and one culture only. A traveller takes advantage of multiple viewpoints. That complex perspective not only allows us to recognize and embrace the value of other places and nations, but also to see ourselves as foreigners. By looking at the experience of voyage and migration in the art of Central and Eastern Europe, The Travellers shed light on the contemporary identity of the region.

Partners of the exhibition: