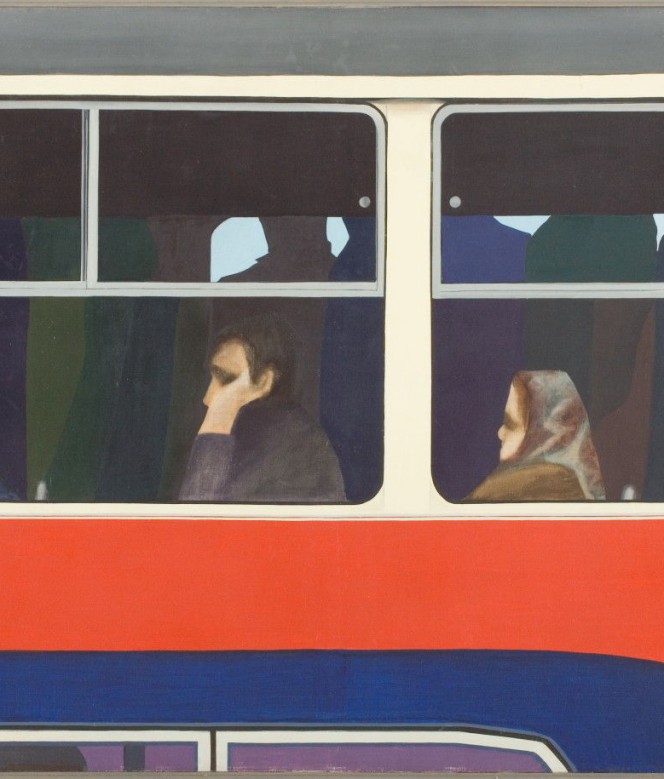 On a Journey is a second exhibition realised by the Zachęta National Gallery of Art as part of the project Art Gallery at Chopin Airport. The works on display are from Zachęta’s current collection, built since the 1990s and comprising mainly works by contemporary Polish artists exhibited at the Zachęta or projects co-produced by the gallery.

The venue – an airport – has obviously influenced the show’s subject matter. Travelling, however, is but a point of departure, background, and metaphor for the featured works.

Commuting to work or school or going to meet someone is also travelling. It is a regular part of our everydayness, a rather ordinary and non-fascinating one, as it is presented by Miłosz Benedyktowicz’s The Tramway. It is only unusual events and elements – such as a choir singing at an underground station and on an underground train in Paweł Althamer’s film – that can make it attractive and worth remembering. Wilhelm Sasnal similarly focuses in his paintings on capturing on his way the most personal, ephemeral, and seemingly unimportant.

A distant, planned or unexpected journey, involves a thrill of excitement as well as the awareness of an inevitable change – a fact explored in the work of Andrzej Dłużniewski, and present in the reflective question Where Are You Going? posed in Roman Banaszewski’s lithograph. Travelling often evokes a sense of nostalgia. It is triggered by the very motif of the road, present in the paintings of Tomasz Tatarczyk and Jarosław Modzelewski. Bogna Burska’s photographic series titled precisely The Road evokes an splendid, but disturbingly ambiguous, contrast – traces of blood on the snow. Wojciech Doroszuk’s film explores the currently topical theme of labour emigration, presenting a vision of hard work and the sense of anxiety and uncertainty that accompanies travelling in search of a better life and work in a highly picturesque and poetic image of bucolic nature. What Agnieszka Polska’s video immediately brings to mind is the idea of summertime travel, but this idyllic image is streaked with anxiety. The motif of travelling in the sense of going on a spiritual journey – exploring one’s states of body and mind – appears in Paweł Althamer’s The Boat and the Spacesuit.