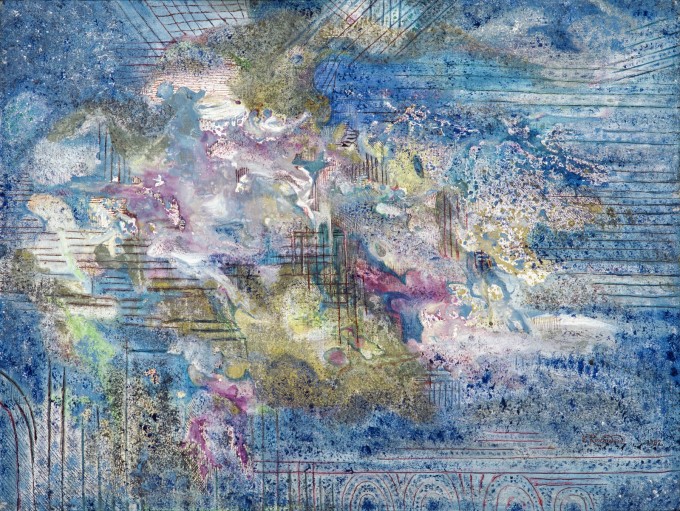 Erna Rosenstein was a painter and poet as well as an author of drawings and assemblages. She studied at the Wiener Frauen Akademie in 1932–1934, and then at the Academy of Fine Arts in Kraków (under Wojciech Weiss) in 1934–1936. Associated with the Grupa Krakowska collective, she was particularly close friends with Jonasz Stern; she was a keen supporter of the leftwing  movement. During the war Rosenstein was in the Lviv ghetto and following her parents’ tragic death she went into hiding in Warsaw. Memory of the traumatic wartime experiences would form a recurring theme throughout her work. Based in Warsaw from 1949, she joined the reactivated Grupa Krakowska in 1957.

Highly personal, poetic and utterly free of any limitations or influences, the work of Erna Rosenstein can generally be classified as surrealist. She perceived the creative process as a free, intuitive and irrational act. ‘I knew that something within myself wanted to come out and only I was able to see it and express it’, she said (‘Na pewno mu nie przeszkadzałam. Rozmowa z Erną Rosenstein’, in Śnił mi się Artur Sandauer, ed. Józef Baran, Kraków, 1992). One can hardly trace a clear line of development in her stylistically diverse oeuvre. Early on, she eschewed figuration on behalf of abstraction, which better suited her  imagination. In the 1960s, her works are filled with organic forms of great vitality, but later the compositions become more disciplined, dominated by elaborately complex lines tracing quasi-architectural structures, mysterious signs, or hieroglyphs. An important facet of Rosenstein’s practice were objects, intriguing and sophisticated, created with old or discarded items. Besides their purely visual value, it is precisely hidden meanings, surprising connotations and reflections that give her works their lasting power.