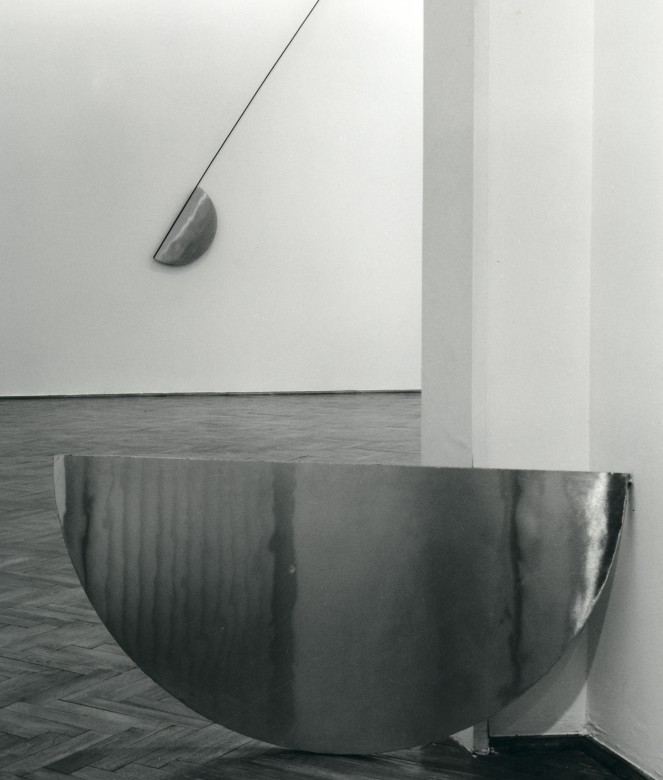 Koji Kamoji Silence and the Will to Live

curator: Maria Brewińska
cooperation: Julia Leopold
artist's assistant: Naoko Takeda
interns: Marcelina Palińska, Marta Korzekwa
Special thanks to the the Municipal Road Authority (ZDM) in Warsaw for their help in implementing the installation "Silence and the Will to Live".

Silence and the Will to Live is a retrospective exhibition of the Japanese-born artist Koji Kamoji, who has been based in Poland since 1959. We are presenting a selection of works ranging from the 1960s to the present — paintings, drawings, and, crucially, installations. From the historical perspective, the exhibition recapitulates the work of a creative individual whose artistic identity is set in a broader context: of Polish art, of universalistic modern art, but also of Oriental art, its aesthetics and values.

The oldest works on display, the so called Pruszków paintings from the 1960s, formally spare, manifest the beginnings of Kamoji’s artistic path. Their minimalism and use of simple and easily available materials characterise all his works. The usual materials — plywood, rocks, metal rods, aluminum, paper — contribute to the formal and conceptual rigor of the artworks, establishing enigmatic correspondences that resist clear-cut interpretations. Japanese aesthetics are alluded to in works such as the white painting series, the installation Two Poles (1972), combining abstraction with a centrally placed stone, or Silence and the Will to Live (2018), informed by traditional Japanese gardens. Works about space, air, and water carry traces of personal experiences — the long voyage to Poland. Other pieces contain reminiscences of tragic events — the suicidal death of a friend in Sasaki’s Moon (1995). The installations The Auschwitz Stone (1988) and Hiroshima (1995) touch upon traumatic collective experiences. The compositions from the Still Lifes series (2003) express the artist’s mindful attitude towards the objects that surround him. In a series of paintings devoted to the Middle Ages or in drawings, started a few years ago, informed by Oriental traditions but also by early European abstraction and its quest for transcendence, Kamoji reflects on art and its changes. Kamoji’s work is filled with a desire to touch upon the essence of life, things, the world; it is a manifestation of an intuitive experience of nature and of Buddhist spirituality.

Created especially for the show, the monumental installation Silence and the Will to Live — a metaphor of a deeper relationship between man and nature — introduces new themes to Kamoji’s oeuvre. The footpaths allow the viewer to enter the installation space, but it can also be experienced from the wheelchair, which is a special object, one that raises the issue of transience and physical degradation. This theme returns in the installation Draught/Old Age (2018), made of Japanese paper. The artist confronts the universal human experience but does it without pathos or a sense of tragedy or anxiety. Thanks to his inner discipline and intuition, Kamoji combines art, life, and the spiritual experience into an inseparable whole. To art and his own presence in it he ascribes a metaphysical goal — to reveal the truth of being, even the most difficult one, yet always determined by the will to live.

Koji Kamoji was born in Tokyo in 1935. In 1958, he graduated from the Musashino Academy of Fine Arts in Tokyo. He then enrolled at the Warsaw Academy of Fine Arts, graduating in 1966 in the studio of Prof. Artur Nacht-Samborski. Associated with the Foksal Gallery in Warsaw since 1967. Winner of the Cyprian Kamil Norwid Critics Prize (1975) and the Jan Cybis Prize (2015).

Special thanks to our interns - Marcelina Palińska and Marta Korzekwa

Co-publisher of the catalogue accompanying the exhibition: