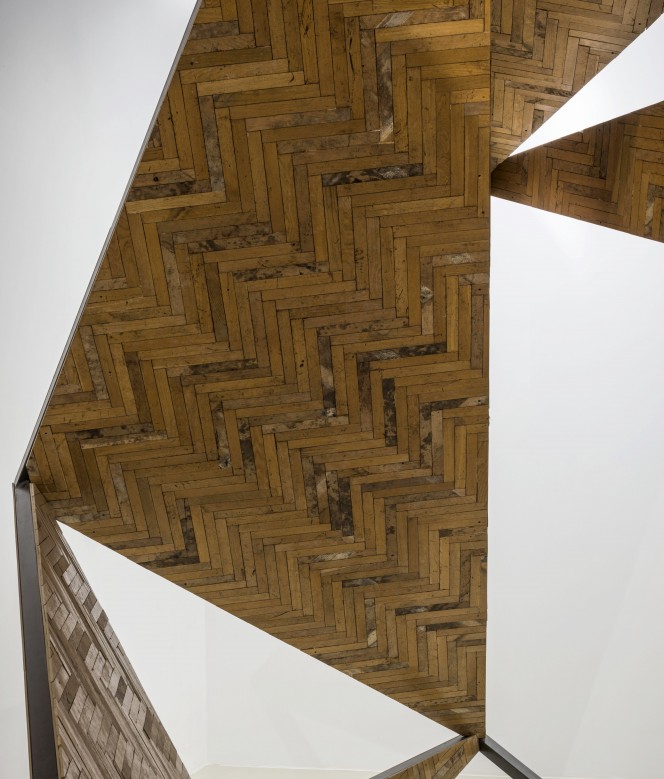 Jarosław Kozakiewicz is an artist who works at the intersection of sculpture, science and architecture. In practice for almost three decades, his work has a remarkably constant focus on the human body.

In his artworks, environments, architectural schemes and land art projects in Poland and across Europe Kozakiewicz connects the human body with the world. Leading architectural historian Joseph Rykwert says ‘Few - if any - artists nowadays have concerned themselves so intimately with the mechanics of the body’s engagement in its environment, as has Jarek Kozakiewicz’.

Kozakiewicz ́s artistic-architectural projects draw on a remarkably-wide framework which include genetics, physics, astronomy and contemporary ecology as well as deeply-historical cosmological thinking. Eschewing the certainties of science, Kozakiewicz offers a highly poetic investigation into the nature of embodied being.

A major exhibition of his work, Spinning Head reflects on his long standing interest in the body as macrocosm and microcosm. How does the body relate to the universe? And, conversely, how might the human being be itself a world?

New works created for this exhibition include ‘Spinning Heads’, a sculptural work at the scale of a small building which will be constructed in situ in the Zacheta Gallery. In ‘Homeless Mind’, Kozakiewicz uses video and projection mapping to generate a portrait of the inner world of a homeless man living on the outskirts of Warsaw. Other words include a number of cosmological drawing cycles which Kozakiewicz has been making throughout his career but has never exhibited before.

To date, Kozakiewicz’s high international reputation lies on his utopian and critical architectural and land-art projects. In 2007 his Mars Project, a massive redesign of the landscape of a former lignite- mining area near Lake Baerwalde in Germany, was completed. It takes the form of a rolling landscape shaped like a giant human auricle. The Spinning Head exhibition for Zachęta puts Kozakiewicz’s most recent works as a sculptor and visual artist on display. It puts a constant but less well-known aspect of his practice before audiences in Warsaw. In fact, by showing a number of earl works, the Zacheta exhibition trace a line of connection back to works made in the 1990s (after graduating in sculpture from the Warsaw Academy of Fine Arts and the Cooper Union for the Advancement of Science and Art in New York).

Neither propositions for architectural schemes nor constructional systems, these works are best understood – much like Kazimir Malevich’s architektons – as ways of stimulating the imagination. Like an alternative version of Corbusier’s modulor, a proportional system for architectural space based on the human body, these works derive their geometry from the organization of the senses.

The centrepiece of Jarosław Kozakiewicz’s new exhibition at Zachęta — National Gallery of Art is Habitat, a sculpture the size of a small building. Visitors can enter in and pass through a structure that owes its proportions to the intimate scale of the human face. Not a representation of a face nor its symbolisation, Habitat derives its form from projective geometry based on human physiognomy. Connecting the points of the eyes, ears, nose and mouth with straight lines, Kozakiewicz has, in fact, created a ‘module’ for the production of structures made of trapezoids and triangles. Unlike other proportional systems derived from an idealized human body (most famously Vitruvian man and Le Corbusier’s Modulor), Kozakiewicz’s module lays no claim to be a ‘harmonic’ system to govern the ‘correct’ proportions for the height of interiors, the floor plan of buildings or other architectural matters. It is better understood as a way of stimulating the imagination.

Kozakiewicz has employed this facial ‘module’ in diverse ways. He put it to architectural purposes when he designed an observation tower overlooking the river Warta (2009–2011). The structure privileges sight and so each of its five platforms cantilevers off a central twisting core at a point determined by the pupil in the eye when a head is raised vertically. By contrast, Somersault (2012), explores a lateral movement. A 10 metre long sculptural form created by Kozakiewicz for a small pier in the coastal town of Sopot, Somersault was derived from a drawing of moving head captured — like a series of still images in a film — twisting through the air. The seven modules, fashioned from steel pipes and plywood, appear to tumble along the low platform before plunging towards the waterline. Eschewing the upright and frontal disposition of the human face, the structure seems to be overcome by an irresistible and yet paradoxical impulse to move.

For almost three decades, Kozakiewicz’s work has a remarkably constant focus on the human body. Perhaps best known for urban and architectural schemes (such as The Tower of Love, 2004; Oxygen Towers, 2005; Transfer, 2007), and works of land art (Project Mars, 2003–2007) that seek to connect the human body with the natural world, Kozakiewicz has explored how human invention and imagination can harmonise with the environment. Rejecting proscription of the kind demanded by activists, the rhetoric of ‘solutions’ favoured by architects, or the pragmatism of the engineer, many of his ecological schemes have had distinctly utopian, even ‘impossible’ dimensions. The works on display in Zachęta are even less concerned with utility; offering, instead, a distillation of the intellectual and compositional principles on which much of his output has been based.

One senses a shift of mood away from utopian and euphoric schemes like The Tower of Love in the most recent work on display in Zachęta, Dwelling. In 2016 Kozakiewicz met a homeless man who had been living rough in the forests outside Warsaw and resolved to make a work which addressed the question of inhabitation in a more direct fashion. He began by filming in the studio. The homeless man standing before a grey wall stares back at the camera. Silent and almost motionless, his movements are little more than the micro-expressions on which human face-to-face communication often depends. A moving portrait, Kozakiewicz laid projective geometries derived from the man’s features over the footage. These vectors also form the generative patterns for an accompanying sculptural form which perhaps, given the work’s name, Dwelling, suggests a shelter. Turning one way the viewer looks on the face of the homeless man and, turning another, he or she sees the splintered voids formed by his glances and twitches.

One senses in Dwelling not just aesthetics but also ethics. It draws the viewer’s attention to a singular individual, even if the subject’s identity is undeclared. This work displayed in Zachęta demands that we confront the face of another being, albeit one mediated on screen. Even within the artificial atmosphere of the gallery and pixelated form of the video project, a face to face encounter places responsibilities on the viewer too. Of looking another in the face, philosopher Emmanuel Levinas has said:

There is first the very uprightness of the face, its upright exposure without defence. The skin of the face is that which stays most naked, most destitute. It is the most naked, though with decent nudity. It is the most destitute also: there is
an essential poverty in the face; the proof of this is that one tries to mask this poverty by putting on poses, by taking on a countenance. The face is exposed, menaced, as if inviting us to an act of violence. At the same time, the face is what forbids us to kill.1 Levinas’ purpose is to frame the ethics of the encounter in terms of the equality of what he calls the ‘essential poverty in the face’. When symbols and masks are abandoned, the face permits truly vital encounters.