The project Amplifying Nature is based on the premise that architecture is part of processes occurring on a planetary scale. According to the authors of the exhibition — curator Anna Ptak and architects Małgorzata Kuciewicz and Simone De Iacobis of the CENTRALA collective — it serves not only to offer protection from nature, but is inherently connected with phenomena such as gravitation, water circulation, or the day-night cycle. The authors were inspired by nature-amplifying designs from the history of Polish architecture: the Warszawianka sports complex, inscribed in the Vistula River escarpment, designed by a Jerzy Sołtan-led team of the Art-and-Research Workshops of the Academy of Fine Arts in Warsaw (an example of tapping into geological and hydrological processes), Zofia and Oskar Hansens’  Szumin House (circadian rhythm), and Jacek Damięcki’s visionary, unrealised design of the Floating Rotary Pavilion (water displacement). The same architectural philosophy is reflected in two original designs by CENTRALA — the vertically open Cabrio House and the Rain Pavilion. Staged in association with sculptor Iza Tarasewicz, the exhibition is considered by its authors as a kind of diagram — interpreting the team’s research, it sheds light on the various relationships that architecture is embroiled in.

The installation utilises the phenomenon of water displacement and uses water as an information medium — an environment for drifting architectural models. Throughout the half-year duration of the show, the exhibition space will be actively shaped by factors including water, daily and annual light rhythms, or viewer interaction, demonstrating how architecture is inclusive in processes of physical change.

The presentation at the Polish Pavilion is accompanied by the book Amplifying Nature.The Planetary Imagination of Architecture in the Anthropocene, edited by Anna Ptak and designed by Krzysztof Pyda. 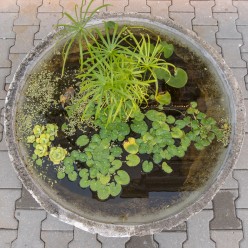 Mass-made in the 1960s, the outdoor concrete flower pots probably also came in a version for aquatic plants. The CENTRALA collective decided to conduct an experiment and create a small pond in one of such pots, which can still be encountered in the streets of Warsaw. The project accompanies the exhibition Amplification of Nature (curator: Anna Ptak), presented in the Polish Pavilion at the Venice Biennale of Architecture.

Through collaboration with the University of Warsaw’s Botanical Garden, the following plants have been planted in the pot installed in front of the Zachęta building:

Yellow water-lily (Nuphar lutea) N. lutea is a common plant in Poland, where it grows in ponds and lakes. The characteristic solitary yellow flowers are held above the water surface.

Arrowhead (Sagittaria sagittifolia) S. sagittifolia has three kinds of leaves: long and narrow ones in the water, similar but rounder ones on the water, and arrowhead-shaped ones above the water. The whorled flowers, white with a dark centre, rise high above the surface.

Fringed water-lily (Nymphoides peltata) N. peltata is a rare and protected species in Poland, sometimes cultivated in small ponds as an ornamental plant with yellow flowers. The floating leaves are cordate, with a long petiole that widens at the base.

Water caltrop (Trapa natans) T. natans is a rare plant in Poland, with numerous ovoid or triangular leaves and a very long stem. The petioles are inflated, providing added buoyancy for the leafy part. Each flower contains a single very large seed. In the past, water-caltrop seeds used to be cooked, baked, dried, and milled into flour. The rosettes were also used to make ritual objects or jewellery.

Common duckweed (Lemna minor) L. minor has very small leaves and serves as food for many animal species due to its high protein content. It is also a strong bioremediator, used in wastewater treatment.

Spotless watermeal (Wolffia arrhiza) W. arrhiza has leaves even smaller than those of common duckweed. It is one of the tiniest flowering plants.

Moreover, the pot features exotic aquatic plants that don’t grow naturally in Poland. Eared watermoss (Salvinia auriculata), native to the Americas, is a floating fern with flat and elliptical surface leaves that grow in pairs and submerged fibrous leaves serving as roots. The freely floating rosettes are of the water cabbage or water lettuce (Pistia stratiotes). An expansive species, it has been reported as a nuisance in natural conditions; in small ponds, it acts as a filter and helps to purify water. Tallest of them all, the umbrella papyrus (Cyperus alternifolius) grows in shallow waters, on the shores of rivers and lakes; cultivated in Poland as an ornamental indoor plant.

The CENTRALA collective is interested in the phenomenon of how aquatic plants are typically ignored in the renovation of modernist buildings and layouts. The microcosm of small ponds is replaced by chemically controlled, sterile containers. Originally, modern architecture was accompanied by natural ponds with various aquatic plants, as exemplified by Mies van der Rohe’s Barcelona Pavilion and the Villa Tugendhat in Brno, Barbara Brukalska’s interiors of the Polish Pavilion at the 1937 Exposition of Art and Technology in Paris, or Wanda Stachniewicz and Alina Scholtz’s post-war projects at social housing estates or the Warszawianka sports complex. CENTRALA considers the presence of aquatic plants as evidence of the modernists’ ecological stance as well as a deliberate reference to the ideas of the mid-19th-century English gardener Joseph Paxton, who was the first to successfully cultivate the giant water lily (Victoria amazonica), known also as Victoria regia, native to the shallow waters of the Amazon River basin. Inspired by its leaf structure and his experiments with the construction of greenhouses, Paxton designed the breakthrough Crystal Palace, the world’s first fully prefabricated building, which catapulted architecture from the age of craft into one of industry.