This exhibition has been organised within the frame of the 4th edition of the biennial competition Views 2009 — The Deutsche Bank Foundation Award for the most interesting figures on the young Polish art scene. The exhibition is a presentation of the seven artists nominated for the award: artists whose work over the course of the past two years has earned the particular attention of critics and curators.

Each of the preceding editions and the collection of the names of the artists distinguished in them was dictated not just by the current state of Polish art, but also was a result of the choices of those nominating. The selecting of artists and the shaping of the competition exhibition that goes with it was once a more straightforward and predictable occupation: it presented the Polish art scene through its different tendencies, forms and problems. The artists that took part in them made highly diverse works, utilising the full spectrum of contemporary artistic media. The language used, however, was more ‘material’, and on account of this the exhibitions were composed first and foremost of objects, and more rarely of virtual images mediated through the eye of the camera. Thus, the result of this year’s nomination is more of a surprise than that of previous editions. For the fourth edition, as is evident in the competition exhibition, has selected artists that in a variety of ways make use first and foremost of the language of video and film.

The artists nominated for the fourth edition are: Wojciech Bąkowski, Olaf Brzeski, Bogna Burska, Wojtek Doroszuk, Anna Konik, Anna Molska and Zorka Wollny. In the output of each are to be found video works and films. The least are to be found in the work of Olaf Brzeski, although, as he says himself, what is happening in film is closer to him than what is happening in art. The artist is known above all as an author of installations and sculptures made, amongst other things, from ceramics which he deforms, ‘ejecting’ them from their pedestal, exhibiting them in contravention of museum standards. Wojciech Bąkowski makes animated films with non-camera techniques in which he declaims/intones extraordinary texts that he writes himself; he also creates acoustic spaces, ‘burrows’, in which he projects films, presents audio pieces and installations made with the use of musical equipment.  Anna Konik is a creator of longer film cycles out of which she composes multi-screen sound installations, comprising quasi documentary cycles or poetic video works. In recent years, Bogna Burska has been working first and foremost in the found footage technique, which involves the altering and joining together of fragments from commercial film productions to create a new narration. Wojtek Doroszuk makes ‘nomadic’ films which are a record of images, figures and situations. They raise the question of the Other, problems of estrangement, linguistic and cultural differences and break the taboo of death. In her films, Anna Molska recomposes modernist-Polish People’s Republic utopia and traditions, suggesting historical references or on the contrary erasing their traces. In addition to series of feminist films, Zorka Wollny has produced a cycle of performances realised in relation to museum institutions that then function as film documentation.

At this year’s exhibition accompanying Views, the artists present new works created specially for the exhibition together with works made in recent years. Olaf Brzeski’s installations are the only non-film objects in the exhibition. Three showcase-terrariums, with staffs of rusted metal inside provoking diverse associations, are exhibited in the gallery’s hall, beyond the standard exhibition space. The iron staffs and one showcase have been submitted to the type of deformation/deconstruction so characteristic of the artist’s sculptural practice. Wojciech Bąkowski and Anna Molska decided to create a joint installation entitled Finished, composed of a video film (the recording of an action staged in the deserted fabric of an airport), a specially prepared soundtrack and acoustic space. In addition to four found footage works from the series, A Game with Shifting Mirrors from 2006–2008, Bogna Burska presents a new film 12:30, which is a formal experiment and also an attempt to penetrate the interior of film time. Wojtek Doroszuk shows the film Special Features composed of fragments rejected during the process of editing his earlier films; seven of which we also see at the exhibition. Anna Konik has prepared a new installation of video projections of unreal, blurred and multiple images/reflections filmed in a Berlin residential home for teachers on stipends. In her Black Film, Zorka Wollny has attempted to make a visualisation of one of her nightmares; at the exhibition, she also shows five documentary films of performances made from 2004–2009. A special event is a concert/performance, Ballad on the Zachęta Building inspired by the history of the gallery.

The winner of the competition will be selected from among the participants by a 7 person jury. The winner will be announced on 22nd October 2009. First prize in the competition is 15 000 Euros, while the second is a study visit to the Villa Romana in Florence

Wojciech Bąkowski has been chosen as the winner of the 2009 award because of his outstanding ability to imbue his visual images with both deep psychological elements and a sense of the poetic. His films offer precise observations of the socio-cultural context and a strong sense of individual feelings and experiences. These he presents in dynamic, animated images with accompanying poetic commentaries which combine to form an audio-visual whole. The inner monologues of his protagonists turn out to be of a wider importance for our own observations and definitions of identity, and thus of wide-reaching, universal significance. In observing the seemingly extraordinary and peculiar appearances of the actors and motifs in his films, we in fact discover truths about ourselves. In his almost obsessive observation of himself and others, Bąkowski does not try to be expressive and emotional, but always to take up a conceptual and analytical challenge. This is not emotional art, but an art about emotions. He is an artist that is able to step back from himself in order to achieve presence. This is clearly demonstrated by his cooperation with Anna Molska which, in both conceptual and stylistic terms, is clearly in line with Bąkowski’s earlier work. Both artists deserve great credit for this outstanding artistic collaboration. However, the jury’s decision was not based only on this exhibition and the new works of art, but on the whole of the artist’s oeuvre to date.

Anna Molska won her award for the fact that her films and performances offer a new perspective on the modernist past, a perspective that is itself innovative. This utopian and socially critical modernist movement is shown in a contemporary context. The artist places icons of this critical modernism, the geometrical and constructionist forms that constitute its inherently pictorial quality, into real social and landscape contexts where they transform into real icons of opposition.  The artist thus democratizes forms that ought to be open to this. Her self-identity and process of self-interrogation as an artist are linked to the questions that history of art has for the as yet unresolved topic of utopia. This is art for art’s sake that nonetheless breaks out of the hermetic closure of l’art pour l’art since in her works, the artist makes firm contact with a reality and context beyond art. This is also a challenge: to not follow history programmatically and not to fix on utopia tightly defined rules, but to emphasize them through a playful art. 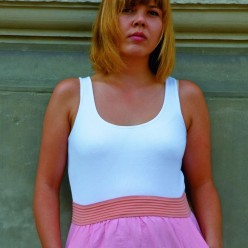 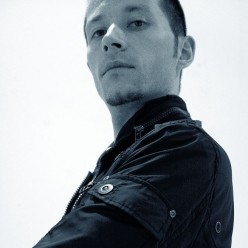 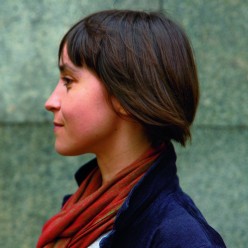 Born in 1974 in Lubliniec, Poland. Works with video, installation, photography and drawing. In 2012 she received a doctorate in fine arts from the Media and Scenography Department of the Academy of Fine Arts in Warsaw. She has been a guest lecturer at Bielefeld University (2013/2012), Humboldt University in Berlin (Institut für Kunst- und Bildgeschichte, 2009) and the Sommerakademie in Salzburg (2009/2008), and has received artistic and academic fellowships. Her solo exhibitions include: Void Gallery, Derry (2014); parliament of Sweden, Stockholm (2012); Atlas Sztuki, Łódź (2011); Max Libermann Haus, Berlin (2010). She participated in, among others: A Voice of Ones Own, Konstmuseum & Moderna Museet, Malmö (2014); Deprivation, Arsenal Gallery, Białystok (2014); Next Door: Poland and Germany –1000 Years of History in Art, Martin-Gropius-Bau, Berlin (2011).