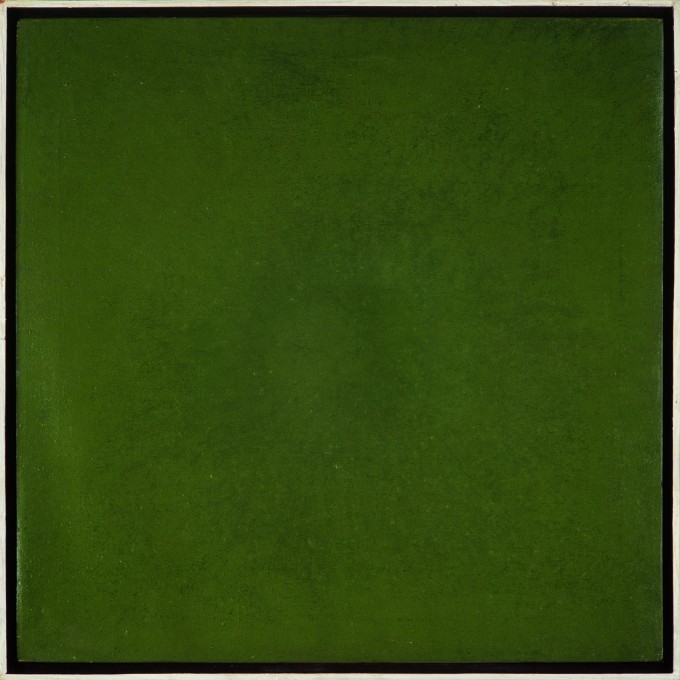 Kajetan Sosnowski (born 1913 in Vilnius, died 1987 in Warsaw) was
a painter, graphic artist, illustrator, and graphic designer. In 1934–
1939, he studied at the Warsaw Academy of Fine Arts under Tadeusz
Pruszkowski and Władysław Jastrzębski. After the war, he was a social
and cultural activist, founder of art schools in Siedlce and Łódź, of the
Łódź branch of the Association of Polish Artists and Designers (ZPAP),
and of culture clubs for workers. Associated with the community of the
Grupa 55 collective, which he co-founded. Co-organiser of the Biennale
of Spatial Forms in Elbląg and Galeria 72 in Chełm.

A characteristic trait of Sosnowski’s art were painting experiments
inspired by science. He was fascinated by the phenomena of light and
colour, and the ways of expressing them in painting. An abstract painter
from the 1950s, the process of a gradual reduction of the means of visual
expression led him to formulate the concept of the ‘empty painting’,
a monochromatic canvas illuminated with its inner light. The result of
this stage of his investigations were monochromatic paintings of intense,
saturated colour, surrounded by a black contour (e.g. Red Painting; Green
Painting), as well as series of Polyptychs, where he combined several
paintings, e.g. of complementary colours, into a new whole. According to
Sosnowski, his paintings ‘showed colour as quantum values of energy’.
He explained: ‘For this purpose I learned to see colour anew, overcoming
my natural impulses’ (Zbigniew Taranienko, ‘Sztuka świata awizualnego.
Rozmowa z Kajetanem Sosnowskim’, Sztuka, no. 5, 1979).