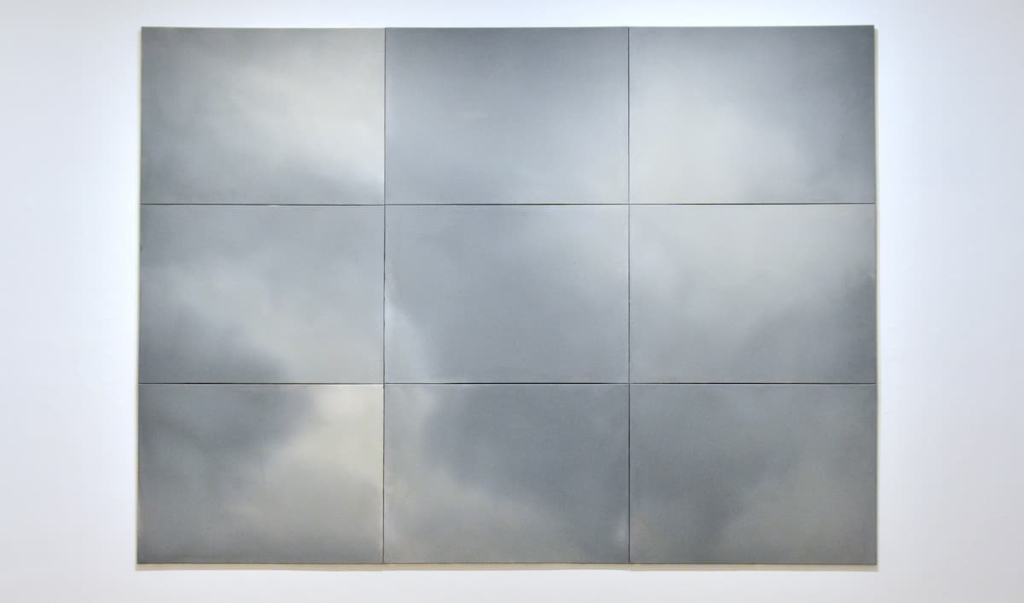 “Did you feel mature before the age of Christ, or after?” – Maria Brewińska asks Rafał Bujnowski in an interview. “Naturally after. That’s probably related to mental stabilization. I wouldn’t be able to single out one breakthrough event, just like in a film: something happens and suddenly everything looks differently. It’s a process, more gradual than an explosive or dramatic turn of events.” In the fourth issue of our Magazine, built around the theme of “time”, we revisit the artist’s individual exhibition in 2016, titled 2066.

Bujnowski uses images, film and special ready-mades (two 1986 Mazdas) to move us in time – into the past and future – reflecting on its status and influence on the matter: body, object, painting.

By aging new paintings by 50 years in a special chamber, Bujnowski practised futurology. At the beginning of the 20th century, the Futurists declared rejection of the past and looking into the future. It was their works that opened the large exhibition at the Zachęta in 1968: Italian contemporary art. 100 works from futurism to the present day depicting the Italian contribution in the European avant-garde of the 20th century. You will have a chance to learn more about it thanks to the study of Petra Skarupsky from the Institute of Art History of the University of Warsaw.

Jacek Malinowski has been experimenting with mockumentary for years now. His inspiration for the film Stain, created during the artist’s exhibition Bi-polar (2016), was inspire by the first mock-document in history – the famous radio show by Orson Welles War of the Worlds – which realistically depicted the Martian invasion of the Earth, stirring panic in the American state of New Jersey in 1938. Here Malinowski plays with the formula of catastrophic cinema, showing in three shorts the confrontation of the characters with the approaching cataclysm. Passage of time – measured by tally marks, scratched as if by a convict in a prison cell – is also the topic of Włodzimierz Pawlak’s painting series Diaries. From our collection we recommend Diary No. 2, which formally departs from the paintings in the series. It depicts passage of time in the form of collage made by cuttings, mementos, and pictograms documented on canvas.

An experiment carried out in the 1960s at Łysa Góra, combining the work of local ceramists with the projects of painters, produced a new kind of architectural decoration. The exhibition Łysa Góra Experiment – 50 years later, which took place at the Zachęta Project Room in 2016, juxtaposed the few preserved projects created by the artists with works by contemporary artists mainly ceramic. You can learn more about the curator’s concept, the past and the present of the exhibition in a recording of the walkthrough with Anna Wiszniewska.

In 2014, a year after the premiere of Konrada Smoleński’s installation Everything Was Forever, Until It Was No More, at the Venice Art Biennale, the exhibition presenting this project was held at the Zachęta. The subtitle Time Test indicates the artist’s struggle with time, but also with the space where his sound installation is presented. How do these variables affect its form? We revisit the Zachęta version of the Smoleński’s project and its accompanying folder.

New issue of the magazine, and a new topic – time. In 2016, during the exhibition 2066, Maria Brewińska asked Rafał Bujnowski, among other things, about midlife crisis, maturity and, of course, painting.

100 Works from Futurism to the Present Day Depicting the Italian Contribution to European Avant-garde in the 20th Century – CBWA, year 1968.

Three episodes, connected by the theme of disaster and inspired by Orson Welles’ War of the Worlds.

How to you depict passage of time? Pawlak presents it on a canvas with the help of clippings, past mementos and pictograms.

Ceramic architectural decorations from the 60s, and contemporary artists. Listen to the exhibition’s curator.

In Search of Lost Time

For a ten-year-old, what is “looking for lost time”? Listen to audio description of the work by Tymon Rogalski and his parents.

Everything Was Forever, Until It Was No More — Time Test

How does time and change of space affect an artwork? We recall Konrad Smoleński’s project and the accompanying folder.