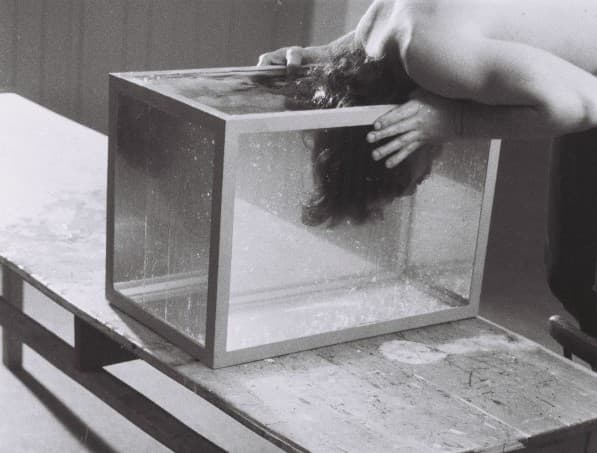 The starting point for the second issue of Zachęta Online Magazine is a conversation with Zbigniew Warpechowski – the precursor of performance art in Poland, author of installations, painter, poet, and philosopher. It was conducted in 2014 by Dominik Kuryłek (co-curator of the exhibition together with Joanna Kordjak) on the occasion of the artist’s retrospective “It”. Warpechowski debuted as a performer in 1967, while The Dialogue with a Fish (in the Zachęta collection) remains one of his most famous performances.

The authors of the exhibition were fully aware that it is impossible to convey the unique experience linking the performer and the audience. For that reason, in their selection of the documentation, they mainly tried to get a sense of the artist’s striving to achieve authentic experiences and feel the metaphysical character of reality. Metaphysics is an important theme of this conversation. “I’m often criticised for failing to mention to God too often, but what can I do?” – says the artist.

The question how to present performance at an exhibition is faced by many performance artists and curators. The duo of performers Grupa Sędzia Główny [Main Referee Group], or Aleksandra Kubiak and Karolina Wiktor, decided to use a different medium for the Spojrzenia/Views 2007 award exhibition. Hopelessness. Chapter 0. Furies is a three-channel video installation, in which the artists use purely cinematic effects to create the space of their performance, impersonating the mythical goddesses of vengeance. Drawn from our collection are also conceptual drawings by Ewa Zarzycka – the author of famous spoken performances illustrating the multitude of forms that activity takes in art.

The film documentation of Natalia Bażowska’s exhibition Lair at the Zachęta Project Room in 2015, takes us into the space created by the artist, featuring films, objects, and paintings. The starting point for this show was quite unusual yet – Luna, an intimate video-performance that showed how Bażowska was establishing a relationship with a wild she-wolf. The exhibition is certainly worth further exploration, we encourage you to read the curatorial text by Magda Kardasz or listen to the recording of a meeting with the artist.

Historically, in the period when the Zachęta was the Central Bureau of Artistic Exhibitions (CBWA), it was difficult to find exhibitions focusing on performance art. But in this context, we found it worth reviving the memory of the 1967 exhibition of painting and drawing by Witkacy, arranged by Tadeusz Kantor. One of the most eminent creators of avant-garde theatre took on the challenge of exhibiting the visual works of the outstanding dramatist. What did the exhibition look like and how was it received? Read about it in the text by Piotr Cyniak. Talking about more recent events… we recall the inauguration of the project Plac Małachowskiego 3 (curator: Magdalena Komornicka), during which actors took over the stair of our building. The performance was created by visual artist Bogna Burska, while an excerpt from her play Nest was used for the inauguration of the exhibition.

Over the past few years the performance has often been frequently presented at the Zachęta. Before we can share the experience of art in the gallery space again, we invite you to watch and read about it online.

The artist talks to Dominik Kuryłek

In the second issue of our magazine, we focus on performance. And we start with a conversation between Dominik Kuryłek and Zbigniew Warpechowski – the godfather of performance art in Poland.

Paintings and drawings by Witkacy, at an exhibition arranged by Tadeusz Kantor himself. We are going back in time to 1967.

Aleksandra Kubiak and Karolina Wiktor as mythical goddesses of revenge. Video performance and an ironic pun based on the duo’s name.

Ewa Zarzycka – performer and  conceptual artist. Here are her drawings from our collections.

The starting point for the exhibition at ZPR was a video performance Luna – an intimate record of the artist establishing a relationship with a wild she-wolf.

Fragment of the performance (in Polish)

Inauguration of the Plac Małachowskiego 3 project, with a surprise artistic performance.

One of the chapters in our guide to contemporary art for teenagers is dedicated to Warpechowski’s Plating.